In this tutorial I will show you how to create and work with Java Interfaces. As always I will demonstrate a practical example of Java interface. 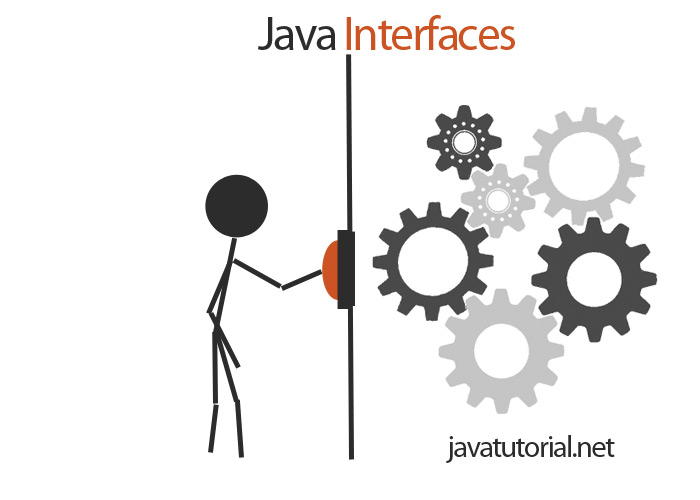 What is Java Interface?

As many other Java concepts, Interfaces are derived from real-world scenarios with the main purpose to use an object by strict rules. For example, if you want to turn on the washing machine to wash your clothes you need to press the start button. This button is the interface between you and the electronics inside the washing machine. Java interfaces have same behaviour: they set strict rules on how to interact with objects. To find more about Java objects read this tutorial.

The Java interface represents a group of methods with empty bodies. Well, it is not mandatory to have a whole list of methods inside an interface – they can be 0 or more… but, no matter the number of methods, they all should be empty.

Using the example with the washing machine, lets create an Interface called WashingMachine with one method startButtonPressed()

That’s all you need to define an interface. Note the usage of the keyword interface. The method startButtonPressed()has no body. It just ends with ; Of course you can also use methods with return types and parameters like: public int changeSpeed(int speed);

How to Implement an Interface

We use the implements keyword in the class declaration. We need to implement the startButtonPressed method (give it some functionality) or otherwise our class will not compile.

Please note, you can implement more than one interface in one class. You just need to separate the interface names with commas in the class declaration like this:

and the output of the program will be :

There is another common usage of interfaces in Java – to tell an object has specific use or characteristics.

Lets give one more real-world example. You are a survival in the woods. You find different objects and put them in your backpack for later use. When you rest you go through the found objects and eat the once that are eatable.

First, lets define an interface called FoundObject with no methods at all. Those are all the objects we found in the woods:

now we define a second interface called Eatable. We will use it just to denote if the object is eatable or not

With the following three classes we will define the objects we find in the woods – apples, raspberries and stones

Now lets write the survival program. We will collect found objects in our backpack (array) and try to eat them

The output of the program is:

First we create the interface FoundObject with the sole purpose to denote the objects of specific type, so we can put them in the same array. We create the Eatable interface to mark which objects can be eaten.

When we create the three objects (apple, raspberry and stone) we put implements FoundObject in the class declaration for all of them, and the one we can eat also implement the Eatable interface.

When we iterate the array we check if the current object is of type Eatable. We do this with the help of instanceof keyford. instanceof returns true if two objects are of the same type. In our case apples and raspberries will return true when checked with instanceof Eatable, because both implement the Eatable interface. To be able to execute the eat() method we need to explicitly typecast the object to Eatable first. We achieve this with following line of code:

We can not execute the eat method of a stone object, because it is not of type Eatable.

The code example above can be written in more fashionable way using abstract classes, Collections and inheritance. Some of those are more advanced topics and are explained in next tutorials. This is a beginner tutorial that intents to explain java interfaces only.

wpDiscuz
2
0
Would love your thoughts, please comment.x
()
x
| Reply
We use cookies to ensure that we give you the best experience on our website. If you continue to use this site we will assume that you are happy with it.OkRead more