This example demonstrates the usage of encapsulation in Java programming language

Encapsulation is all about wrapping variables and methods in one single unit. Encapsulation is also known as data hiding. Why? Because, when you design your class you may (and you should) make your variables hidden from other classes and provide methods to manipulate the data instead. Your class should be designed as a black-box. You have access to several methods from outside (classes) and a return type for each of those methods. All you need to know about this class is the name of the method and the return type. In other words – you give the class some data and get new data as response, without caring about the internal mechanisms used for data processing.

To achieve encapsulation in Java: 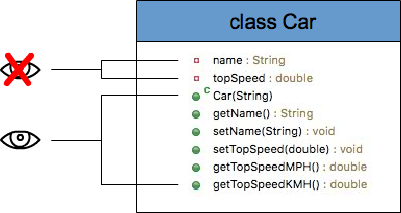 Following example demonstrates encapsulation in Java. The Car class has two fields – name and topSpeed. Both are declared as private, meaning they can not be accessed directly outside the class. The getter and setter methods : getName, setName, setTopSpeed etc. are declared public. Those methods are exposed to “outsiders” and can be used to change and retrieve data from the Car object. Note, we have one method to set the top speed of the vehicle and two getter methods to retrieve the max speed value either in MPH or KMH. This is what encapsulation does – it hides the implementation and gives us the values we want

The main program creates a Car object with given name and uses the setter method to store the top speed for this instance. Now we can easily get the speed in MPH or KMH without caring about how speed is converted in the Car class.

This is the output of the example

Lets summarise the benefits of encapsulation:

You give a fair definition of encapsulation, but your interpretation after that is highly debatable. If encapsulation is about hiding the internal structure of your object, then clearly both getters and setters break this encapsulation. Let’s think about it this way: In your Car example do I (as the user of your object) know the internal structure of a Car? Of course I do, because I know it consists of a “Name” and a “Top Speed”. I *have* to know it, to use it. You did not hide anything from me. So, how could we change the Car to really… Read more »

Thank you for your comment Robert, I appreciate your effort making this tutorial better. Lets keep the discussion going 🙂 I have to disagree on following: (1) In my Car example I do not pretend the internal structure of the class is hidden. As you already mentioned in your comment – “you have to know it to be able to use the object”. What is hidden tough, are the internal mechanisms the data is processed, not the structure itself. (2) using getter and setter methods is an important concept of encapsulation. They do not break encapsulation, it’s the opposite –… Read more »

Thank you for your reply. Let me try just one more time to point out some internal inconsistencies of what you are saying. 1. You say that the internal mechanisms are hidden. But are they really? Is there any difference in the above Car class to just making both instance variables public? There is none, you get exactly the same functionality. You used the words “black-box” in your introduction. Do you thing the Car class above is a black-box? Remember, we’re talking about the Car class above, not some potential future Car class. 2. Getter/setters are *not*, in any shape… Read more »

wpDiscuz
3
0
Would love your thoughts, please comment.x
()
x
| Reply
We use cookies to ensure that we give you the best experience on our website. If you continue to use this site we will assume that you are happy with it.OkRead more