We asked you : “What technology are you going to learn in 2018?”. Here are the results.

One week ago we started a 1-question survey to get insight into the most desired technologies in year 2018 among several Java communities. Our purpose was to consolidate our efforts and provide tutorials and examples about topics you are interested in. Nevertheless the results from this survey are very informative and interesting on their own. There are trends we were able to predict, but to be honest some of the top technologies you picked up to learn in 2018 are surprising to us. 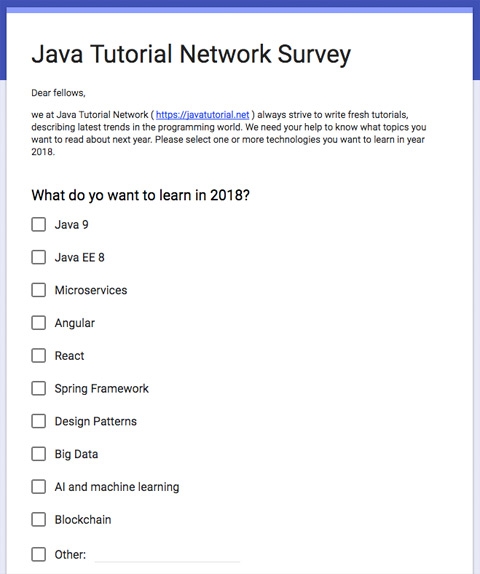 The multi-choice survey (meaning you could pick more than one answer) gave following options:

As you may already noticed not all of the given choices are Java frameworks and technologies. We also added front-end frameworks and trending technologies in the IT sector like Big Data, AI and Blockchain. I am sure you will agree with me, that having core Java knowledge is just the minimum to excel in various software areas and the programming language itself is just a tool to implement different/bigger solutions.

The Most Wanted Technology among Java Developers in 2018

So finally here are the results. Following diagram shows the most desired technologies in year 2018 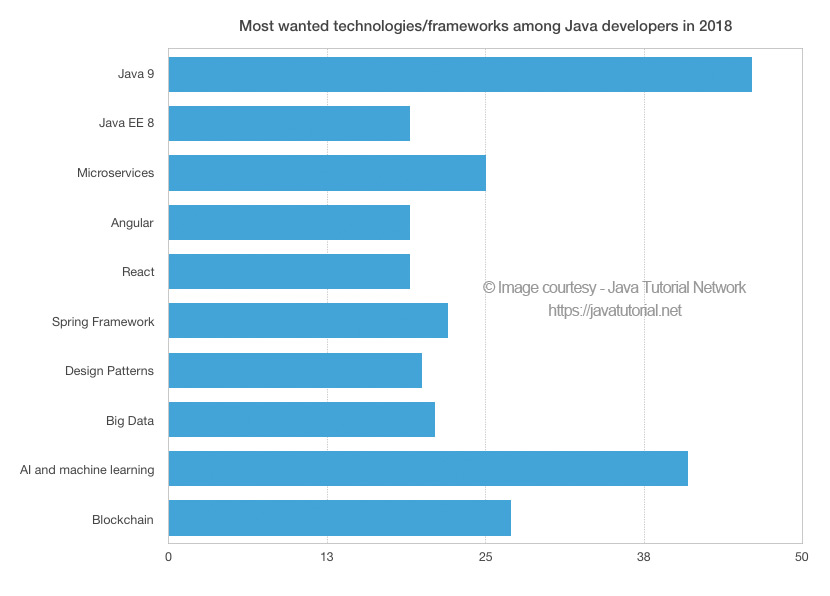 Most wanted technologies among Java developers in 2018

Released in September 2017 – Java 9 is by far the most attractive new technology to learn in 2018. With 45.5% of all votes Java 9 is the clear winner. It’s not a big surprise developers want to learn the new features of a language they use in everyday work. We already covered you up with some Java 9 tutorials like : JShell and Immutable collections. There will be many more to come in 2018

Although AI and machine learning are very trendy in the software industry right now, I must confess I am pretty surprised of the number of votes for this technology. It’s obvious – Java developers want to cover this area too. And why not? Previously mainly developed in C and Python, neural networks, deep learning and AI are not privileged to those two programming languages anymore. Frameworks like Deeplearning4j bring Java developers back in the game. Ofcourse we will give our best to provide you with AI and deep learning tutorials in 2018.

And the bronze medal for 2018 goes to blockchain technology. Alright, we all have heard about Bitcoin, Ethereum, or other cryptocurrencies with funky names rolling around our news feeds. As seen in the results diagram above the tech community is now finding other potential uses for the blockchain technology and is eager to learn how to exploit all it’s potential. The Java community make no exception either. We are preparing some tutorials on this topic too.

Although not a new concept, microservices became trendy last year among server side developers. Java community makes no exception here. Evolving architecture concepts and the demand on distributed and simple architecture makes many companies decide for microservices. Forced by application architects or willingly a lot of Java developer will spend time to learn about microservices in 2018.

And yet for another year Spring is the technology of choice for many Java enterprise developers. With 21.6% Spring is winning against Java EE 8, which has 19.3% of all votes. We already started writing Spring tutorials for you. Now as Spring 5 has been released expect more cool examples and tutorials to come.

Big data is another trendy field in the Software industry for the last few years. Also there are plenty of job offers in this area, so if you are about to learn Big Data you are on the right track.

Java EE 8 comes with many new features like Servlet 4.0 with support of HTTP/2, new and improved JSON building and processing, improved CDI and RESTful web services, new JSF version, new Java EE Security API and others. Still the majority of back-end developers pick Spring as their technology to learn in 2018.

Although not a technology neither a framework, design patterns made it to position 8 in our list. Readable, clean and maintainable code is the goal of many developers and it should be.

Being a full-stack developer nowadays means you should have considerable knowledge in front-end technologies too. Not really a trend Angular and React are great way to build the presentation layer of your web-app. Those two are not the only choice for front-end development of course and if we look back and see how quickly JS technologies evolved over the past years I expect at least 3 new JS frameworks till the end of 2018 😉

Angular and React share the same number of votes.

It is great to know about these latest trends and technologies being java developer its important to stay updated with small small changes and latest tech trends and all. You have covered up great insights here which are helpful for developers to know. Thanks a lot for sharing!