This is the first Java tutorial from a series of tutorials for beginners. If you want to learn Java in a simple way you are on the right place here. I wont go into great details in this tutorials. My goal is to teach you how to write Java code in no time! If you need detailed information please visit the advanced sections on our site javatutorial.net

This is the official Java logo

Why is Java the best choice of programming language nowadays? Currently Java is #1 development platform in the world! It is used everywhere – on desktops, mobile devices, enterprise servers … even your DVD player runs Java. If you are still not convinced, here are some interesting statistics (* taken from Oracle timeline):

How Java Compares to Other Programming languages?

There are a lot of programming languages out there like C/C++, PHP, PEARL etc. They are often specialized in completing specific tasks best. What makes Java different? Java is object-oriented, class-based programming language and it is universal! You can write desktop applications, front and back-end server logic, connect and manipulate databases, send and receive objects over the network or write mobile application for your phone or Android device. You can program anything in Java!

Please don’t mistake Java with JavaScript! JavaScript is a scripting language interpreted by your web-browser and not a stand-alone programming language. Java and JavaScript have nothing in common except of the name.

The project of creating Java was started in June 1991 by Sun Microsystems employees James Gosling, Mike Sheridan and Patrick Naughton. The creators first named the project Oak. After a while the name was changed to Green. Finally the developers gave the programming language the name Java from the Java coffee, said to be consumed in large quantities by the language’s creators. The first version of Java 1.0 was publicly released in 1996 by Sun Microsystems. It gained very fast a big community of developers. Sun Microsystems was acquired by Oracle Corporation in 2009. Now Oracle holds the rights and the feature development of Java. 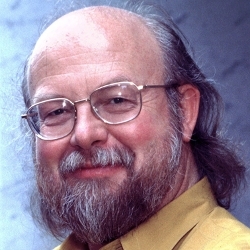 James Gosling – the father of Java

If you are new to Java – don’t worry! We will explain in the next tutorial what version is right for you and where to download it.

In our next tutorial Simple java Example we will explain how to download and install Java. We will also show you how to write, compile and run a simple Java program.

Many thanks you for you inspirational Quote “You don’t need university degree or expensive courses – just continue reading this tutorials and you will be set up in no time.” Yes friends I’m with you and yours suggestion.

A note is during long time I thought Java and JavaScript both are same. Oh! finally It has been gone. Dear if you use any example to separate them then we get to understand properly.

So now I’m going to take your next ……

Thank you for the kind words @bijutoha ! Hope you will find all the tutorials interesting.

This is really nice information about java. Before i knew only CSE people can java because of they know C and C++ language. But right now your article gave me a new way to learn something new. Very nice piece of writing, and thanks for sharing.

Hi filip ,
I have seen it and i think that, beginners need to read this blog . I want to say without any doubt that, must be they learn something from here .

wpDiscuz
5
0
Would love your thoughts, please comment.x
()
x
| Reply
We use cookies to ensure that we give you the best experience on our website. If you continue to use this site we will assume that you are happy with it.OkRead more