This article explains the key components of Java class loaders.

Java Class Loaders are essential part of Java Virtual Machine (JVM). They are used to load classes and interfaces. Althaout class loaders are integral part of JVM and they are very important for the internal working of Java it is unlikely you will need to create a custom class loader in your everyday work as a java developer. Real-life application of custom class loader is for example if you want to create application that will be executed on a container such as Tomcat. What Tomcat does is create a class loader for each web application (so that it can unload the webapps later and release memory).

This article is written with the attempt to explain how class loaders work and to list the key components of a Java Class Loaders.  You may  encounter questions about class loaders on your next Java job interview.

What is Java ClassLoader

We know that Java programs run on Java Virtual Machine (JVM). When we compile a Java Class, it transforms into bytecode that is platform and machine independent. Compiled classes are stored as a .class file. When we try to use a Class, Java ClassLoader loads that class into memory. Classes are introduced into the Java environment when they are referenced by name in a class that is already running. Future attempts at loading classes are done by the class loader, once the first class is running. Running the first class is usually done by declaring and using a static main() method. 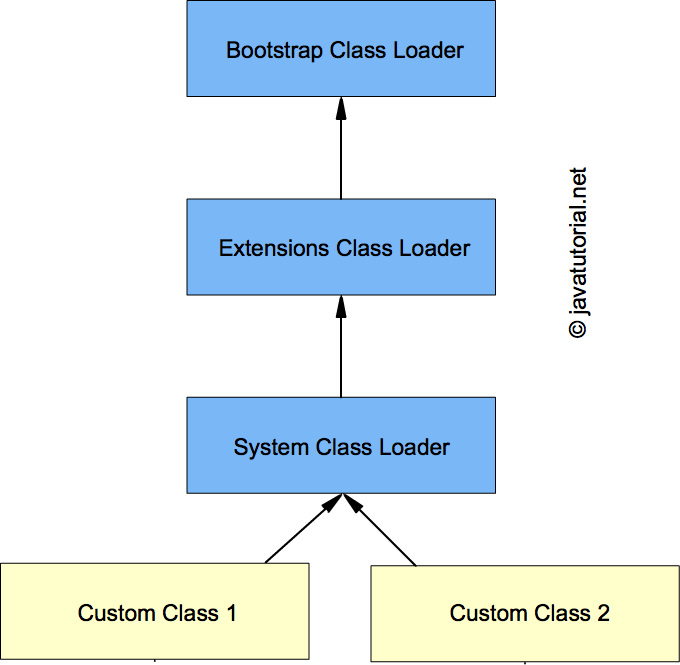 When and How are Classes Loaded

When classes are loaded? There are exactly two cases:

Class loaders are hierarchical. The very first class is specially loaded with the help of static main() method declared in your class. All the subsequently loaded classes are loaded by the classes, which are already loaded and running.

Classes are statically loaded with Java’s “new” operator. Dynamic loading is a technique for programmatically invoking the functions of a class loader at run-time by using Class.forName()

Difference between loadClass and Class.forName

The java.lang.Class.forName(String className) method returns the Class object associated with the class or interface with the given string name. This method throws ClassNotFoundException if the class is not found

java.awt.Point class is loaded. Than we print the class name, the package and the names of all available methods of this class. This is the result of executing the program in Java 8:

It’s not clear what a parent class loader is. You refer at the *hierarchical* organization of class loader, but maybe you could be more detailed explaining it.