This article describes the Java Virtual Machine (JVM) and its architecture

JVM stands for Java Virtual Machine. It provides you with environment to execute your compiled programs, called bytecode. There are multiple implementations of JVM from different vendors for variety of platforms. In this article I will explain the main components of JVM, including memory management, class loading and the Garbage collector.

What is Java Virtual Machine

Java has been designed to run on variety of platforms with the concept “write once, run anywhere”. What does this mean? Unlike programming languages like C++ for example, where the code is compiled for a specific platform and runs natively on it, Java source code is first compiled into bytecode – a .class file. Once compiled the class file is interpreted by the virtual machine (VM). Take a look at the diagram below 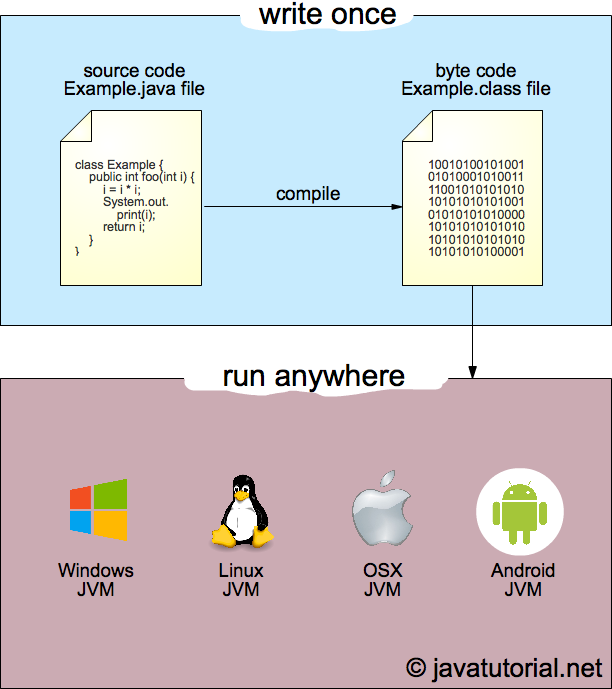 First we compile the java source code (the .java file) into bytecode (the .class file). The bytecode is a middle language between Java and the machine language. You can execute the same bytecode on any implementation of JVM without tweaking the code for one or another OS or platform.

we will look at each one in greater details 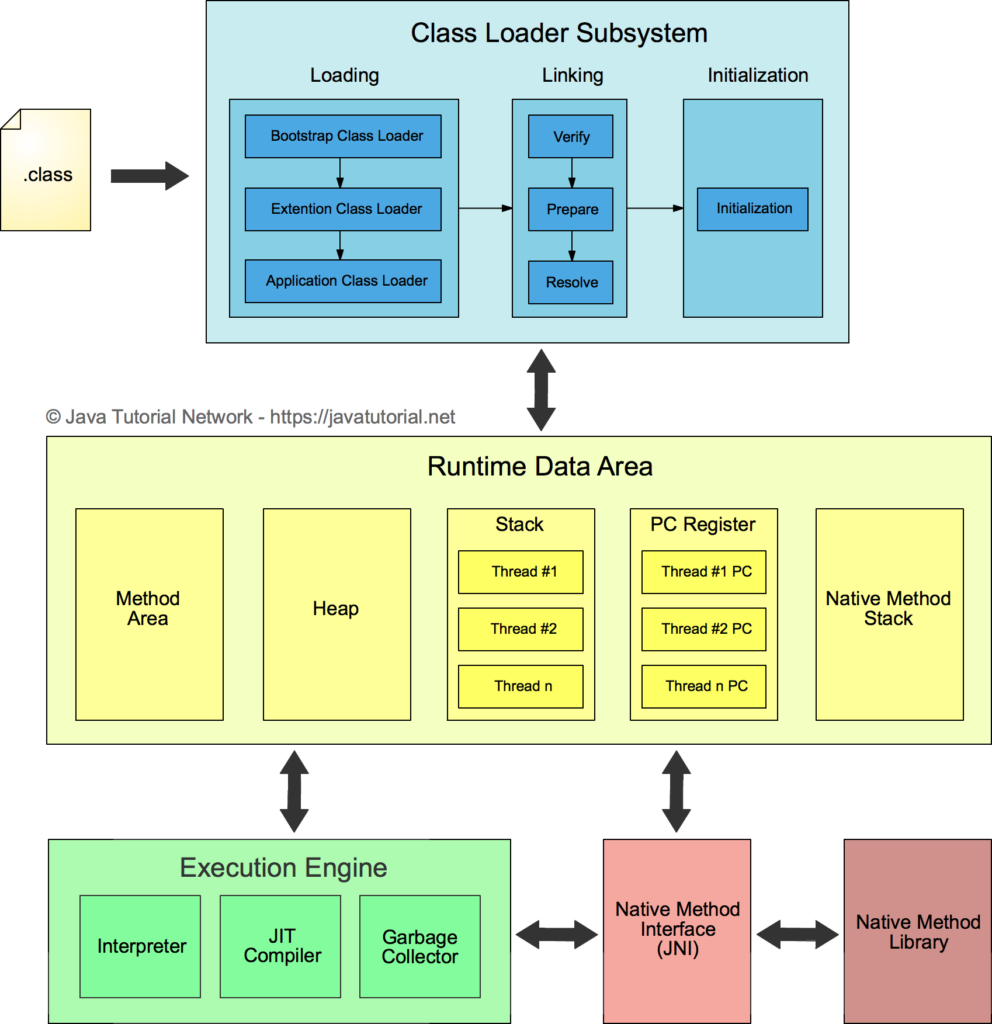 We already covered class loaders in a separate tutorial. You may want to look at Java Class Loaders Explained for more details.

Compiled classes are stored as a .class file. When we try to use a Class, Java ClassLoader loads that class into memory. Classes are introduced into the Java environment when they are referenced by name in a class that is already running. Future attempts at loading classes are done by the class loader, once the first class is running. Running the first class is usually done by declaring and using a static main() method.

There are three types of class loaders:

JVM requires that all of the following properties are maintained:

This is the final phase of Class Loading, here all static variables will be assigned with the original values, and the static block will be executed.

There are five components inside the runtime data area:

All the class level data will be stored here, including static variables. There is only one method area per JVM, and it is a shared resource.

All the Objects and their corresponding instance variables and arrays will be stored here. There is also one Heap Area per JVM. Since the Method and Heap areas share memory for multiple threads, the data stored is not thread safe.

Each thread will have separate PC Registers, to hold the address of current executing instruction once the instruction is executed the PC register will be updated with the next instruction.

The interpreter interprets the bytecode faster, but executes slowly. The disadvantage of the interpreter is that when one method is called multiple times, every time a new interpretation is required.

The JIT Compiler neutralizes the disadvantage of the interpreter. The Execution Engine will be using the help of the interpreter in converting byte code, but when it finds repeated code it uses the JIT compiler, which compiles the entire bytecode and changes it to native code. This native code will be used directly for repeated method calls, which improve the performance of the system.

The Garbage collector (GC) collects and removes unreferenced objects. Garbage Collection can be triggered by calling “System.gc()”, but the execution is not guaranteed. Garbage collection of the JVM collects the objects that are created.

JNI will be interacting with the Native Method Libraries and provides the Native Libraries required for the Execution Engine.

It is a collection of the Native Libraries which is required for the Execution Engine.